A Newcastle restaurant has brought a historic building back to life as an exclusive function space, dedicated to hosting a range of drinks-related events such as wine, beer and whisky tasting. Blackfriars Restaurant and Banquet Hall has opened a Tasting Room, situated directly above the main restaurant, which has space to seat up to 36 guests. The Tasting Room is located in what was originally the Crafts Guilds meeting area, featuring antique 19th century seating used by the guilds. The room will now be playing host to a number of scheduled events over the coming months, including a Beer Tasting and Dinner on August 22, where guests can sample eight beers and homemade bread, followed by a 3-course dinner at Blackfriars. The Tasting Room is also suitable for private events, corporate groups, and hen and stag parties. Options include wine, whisky and cheese matching, local beer tasting, a beginner’s guide to wine tasting, exploring the restaurant wine list, an introduction to whisky, and chef and sommelier food and drink matching.

The Tasting Room is just one of the areas that owner Andy Hook has carefully renovated as part of an ambitious scheme to give previously disused areas of Blackfriars a 21st century facelift – including the Dominican Friary’s Parlour, library rooms and Dormitory Rooms. Says Andy: “The beautiful first floor rooms above Blackfriars have been something of a hidden gem for many years now, so we were delighted to have the chance to bring them back to life, and to show them to our guests. The circular seating lends itself very well to relaxed, sociable gatherings – perfect for wine, beer and whisky tastings.” 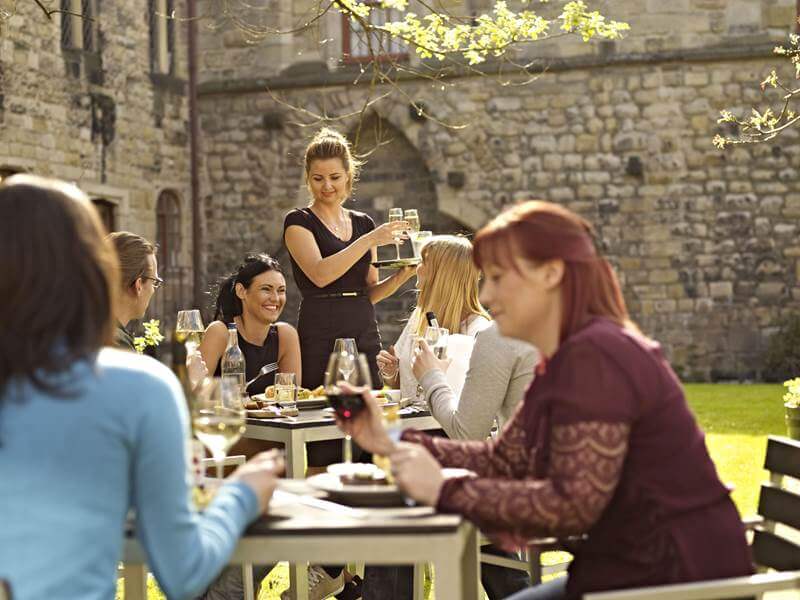 Blackfriars is one of the oldest restaurants in the UK dating back to 1239 when it was the medieval home of the city’s ‘Black Friars’. Its ornate 50-seat Banquet Hall was built to entertain guests and nobles visiting Newcastle, and it was the celebrated venue used by King Edward III to receive royal Scot Edward Balliol, in 1334. In 1543, Blackfriars’ first floor rooms became the meeting houses for the crafts guilds including brewers, bakers, butchers, dyers, skinners, glovers, smiths, tanners and tailors. The Guild of Tailors, among others, continued to meet at Blackfriars until 1974. Now, the Tasting Room has been refurbished by traditional craftsmen, who have carefully chosen furniture, lighting and fabrics in-keeping with the rich history of Blackfriars.

Book now for the Beer Tasting and Dinner on Tuesday August 22.

Good luck in all that you do, fabulous place to eat, drink and socialise with fabulous staff . Wonderful to see all these historical rooms brought back to life.